The house in which Frederick Funston grew up was built around 1860, and  was originally located on a homestead about 5 miles north of Iola. When  the Funston family acquired it in 1867, the home was a simple  three-room, story-and-a-half farmhouse. Additions were made by Funston's father, Congressman Edward H. Funston. Located since 1994 on the W 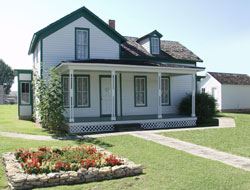 est side of the Iola city square, the home has been restored according to the Victorian decor typical of the 1880s and 1890s. Artifacts and furniture on display at the Funston Home include items that were originally at the homestead during Frederick Funston's boyhood, as well as items pertaining to Funston's explorations and military career. Open 12:30 to 4:30 pm, Tuesday through Saturday, from May 1 to September 30. October 1 to April 30 hours: 2 to 4 pm, Tuesday through Saturday on the West side of the Iola Square next to the Allen County Historical Museum.