Built of limestone, this two-story structure opened in 1869, only 8 years after Kansas became a State. The prisoners were confined in cells on the bottom floor, while the second floor was used by the Jailer and his 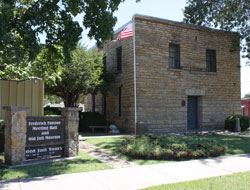 family as living quarters. Visitors may see the solitary confinement cell, walk through the 1891 cell cage and read the graffiti on the walls. The second floor is furnished with objects appropriate to the time when it served as the Jailer's living quarters. This Jail was in use until the new courthouse was built in 1958. The building was listed on the National Register of Historic Places in 1977.

Tours available by appointment or Tuesday - Saturday starting at 1:30 p.m.