Create an Account - Increase your productivity, customize your experience, and engage in information you care about.

In January 1859, a group of settlers gathered to discuss plans to develop a new town. Many of these people who lived in the county and in the nearby towns of Cofachique and Humboldt were looking to relocate Allen County's seat. After much discussion, it was decided that the new town would be called "Iola", in tribute to Iola Colborn- the wife of Mr. J.F. Colborn who had built the first frame-style home in the area. The land was surveyed and platted with wide streets and a four-block square downtown.

In 1860, two small general stores moved from Cofachique to Iola. Soon came a dry goods store, a grocery, clothing store, and drug store. In 1865, Iola became the seat of Allen County. By 1870, the population had increased to 1,500, and the railroads had arrived. However, due to various local and national misfortunes, the town population remained stagnant for the next twenty-five years. Then, in 1895, a great surge in population and expansion hit Iola--giant natural gas pools were discovered in the area. In just nine years, from 1895 to 1904, Iola grew from a town of 1,567 people, to a city of over 11,000.

With this great population explosion, came many of the homes and buildings still standing today. A water plant and electric generation plant were built; streets were paved, schools were constructed, and Iola prospered. In 1910 the Commission form of Government was adopted, and three City Commissioners elected. Unfortunately, the natural gas began to run out, which forced many of the town's industries (such as the smelters) to leave for richer fields. 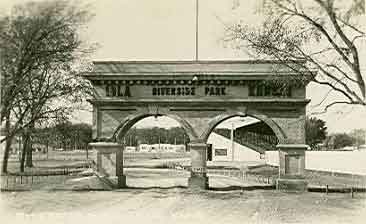 There was little positive change in Iola during the 1920s and 1930s. Two exceptions were the Pet Milk plant, which located here in 1924, and the development of H.L. Miller & Sons dressmakers around 1933. Prior to World War II, the Riverside Park complex was built, many of the older school buildings were replaced, streets and utilities were upgraded, and businesses and homes were constructed.

After WW II, Iola continued to expand its utilities, improve its water purification system, resurface and pave residential streets, and build a new hospital, National Guard Armory, business structures and homes. In the 1970's and 1980's the Thompson Poultry Company and the Lehigh Cement Plant began to decline in Iola; however, new industry such as Gates Rubber Company, Haldex, and Russell Stover's Candies have reinvigorated Iola's economy.

The City of Iola is proud to serve the citizens and businesses in the community, and we look forward to providing these services in the years ahead! We hope it helps citizens and visitors understand the role of their local government and the commitment we have to providing quality services at affordable costs.